Get to Know the Sport of Roundnet 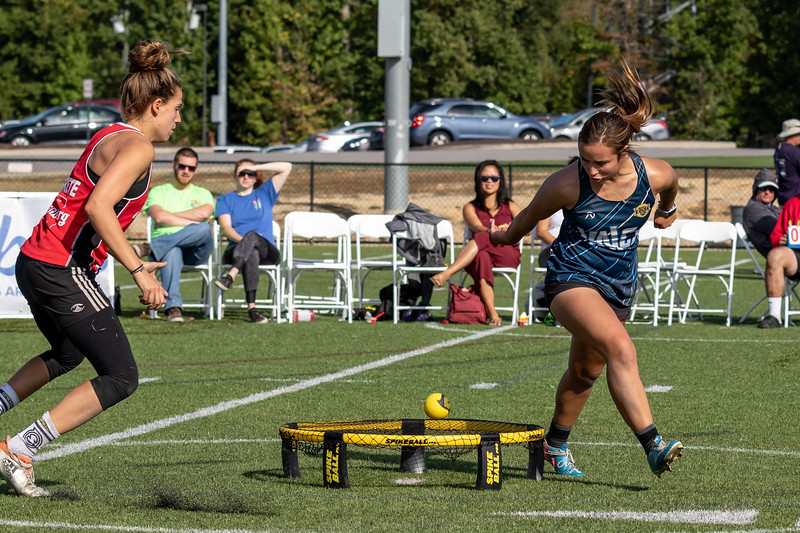 Hi, I am Jordi, RockTape’s newest Roundnet athlete. Since Roundnet is still a relatively new sport, we thought we take a second to introduce! Roundnet is a 2v2 sport and begins when the serving team hits the ball on the net. The opposing team has up to 3 alternating touches to return the ball to the net. A point is awarded when the opposing team cannot return the ball to the net or when the ball hits the ground, rim, or bounces more than once on the net. Sounds simple, right? Now think about having no sides and no boundaries. Roundnet is one of the most unique sports, because unlike almost any other sports, it is played 360 degrees!

Jeff Knurek invented the game in 1989. It started to die down and later became more popular when Chris Ruder, current CEO, launched Spikeball Inc. in 2008. Spikeball Inc. is the main supplier of equipment and tournaments for roundnet.  Spikeball puts on a tournament tour series in the U.S. and also partners with roundnet communities outside of the U.S to grow roundnet around the word. Now there are millions of “ballers” across the world playing roundnet!

Why We Love It!

Being involved with a new and rapidly growing sport, is just one of the reasons people love the sport so much. We get to be a part of molding the sport with our input, tournament participation, and experimenting with different equipment. We also get to travel to new places, doing something that we love. When we go to tournaments, we don’t just go to play, we go to spend time with some of our best friends. This summer I did a road trip around the US. In almost every state I knew someone from the roundnet community that I was able to stay with or play a pick-up game with. This is a perfect example of what it is like to be in the community. People are welcoming, kind, fun, and always down to play some roundnet! The roundnet scene in Quebec City is one of my favorite communities. Canada has a high concentration of “ballers” in areas, which means there are pickup games going on all week long! In addition, each province has their own tournament tour series with tournaments on almost every weekend during season. In Quebec City, where I live now, I have been lucky enough to join a huge roundnet community. Marie-Eve Bergeron and Alex Martel started to build the community a few years ago, starting with just their family and teaching a couple friends who had never played before. Now on average, there are 40+ players at the weekly pickups in the summer and 3 leagues running during the winter!

Click here to learn more about Jordi and her teammate!