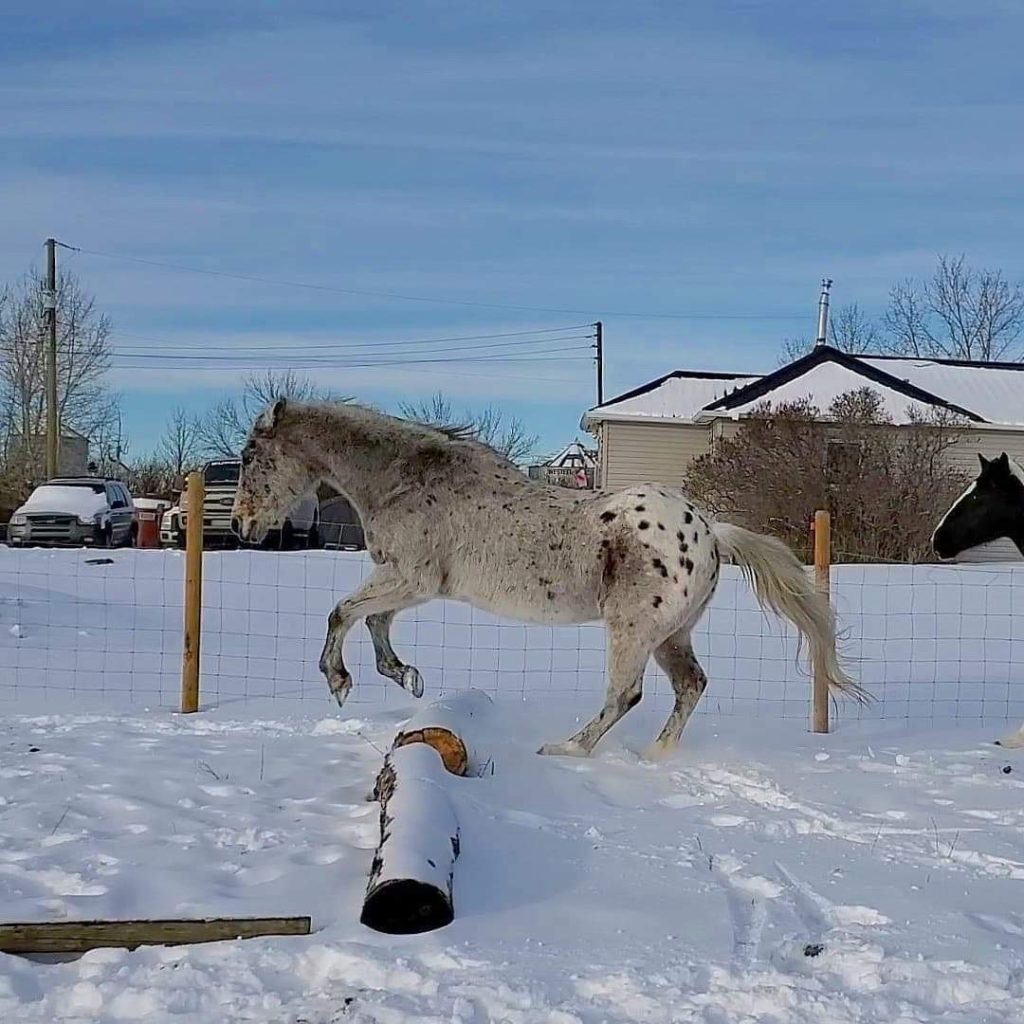 Today on the blog we are talking about one of my most exciting case studies, Rusty! Rusty is a swayback horse who I first used in a Case Study for Animal Myofascial Release Therapy (ANMR) through holisticanimalstudies.org I had no idea when I began taping this swayback horse with Rocktape H20 that the results would be so amazing.  Read below to follow Rusty’s five week recovery and the incredible swayback healing attributes of Rocktape H20!

I was asked to come and look at Rusty, a 22 year old Appaloosa mare who was rescued from the meat auction.  It is possible that she started to jump when she was just 2 years old and has therefore been left swayback.  The new owner was and still is, dedicated to bringing her back to health post starvation.  Her rectum had receded 8 inches, which is more than I had ever seen before!  Additionally, she did not have a lot of energy.  Once the new owner brought Rusty home, she spared no expense in giving her horse a better life, including ANMR, Massage and Equine Kinesiology Taping.  Not not only did Rusty have a severe swayback and had suffered starvation, but she also had a body score of about one. The picture on the left is from the first week that I met Rusty.  The owner was very thorough in her description of Rusty’s condition.  I performed Palpitation using ANMR which revealed a receding rectum, yet flexible sacrotuberous ligaments. However, the sacrotuberous ligaments were difficult to locate due to the receded rectum. Rusty was very sensitive on her inferior and superior right TMJ due to a lost tooth.  ANMR on Rusty’s carpal bones did greatly increase flexibility in her elbows and knees. I used Rocktape H20 and I K-taped a support taping on her swayback.  Note***A full massage was performed after each session. A week later, Rusty showed considerable improvement due to better nutrition, massage, ANMR and Rocktape H20 K-taping. Palpitation and ANMR revealed that her rectum was starting to return to normal but was still receded. Sacrotuberous ligaments were easy to locate, and I must admit I was surprised at their flexibility. I would have expected otherwise in a neglected horse such as Rusty.  Despite still recovering from starvation, Rusty did not seem to have any other health issues. The ANMR and K-taping appeared to have positive outcomes on both her swayback and her energy levels. Once again Rusty responded to more flexibility when ANMR was used on her carpal bones. I noted a total of 3 superficial fascial adhesions along the right girth and neck which released quickly with Gua Sha. Above is a picture of Rusty right after Session 2, the below picture is taken prior Session 3.  These before and after pictures show that her swayback has lifted due to ANMR and taping. The treatments have assisted in strengthening her stomach muscles. Better nutrition and human attention have also contributed to her overall wellbeing. For Rusty, I used a back-support taping and my anchors had 50% stretch.  During session 3 Rusty displayed no reactions to ANMR and began to fall asleep while ANMR was being performed on her thoracic and lumbar regions.  She is adapting to the ANMR treatments and her muscles are becoming reminiscent of the treatments.  Rusty seemed to get tight in the legs and every ANMR session sees more flexibility in the elbow and knee when ANMR is used on the carpal bones. Additionally, her receded rectum was much improved! By week 4, Rusty had gained weight and her back became more streamlined.  The owner was aware that Swayback may not be complete fixable treatment, but ANMR and taping had definitely increased her strength. Rusty was showing signs of relaxation that could indicate she really enjoys ANMR.  Her rectum had been healing incredibly well and her sacrotuberous ligaments were again easy to locate.

Week 5 – Recovery on the horizon !

Finally, in week 5,  Rusty had no reactions to ANMR and she showed visible displays of increased energy and of strengthened swayback and stomach muscles. Her rectum, while still receded, had healed exceedingly well. The results of her swayback improvement is incredibly impressive, thus we will continue to use Rocktape H20 once a month.  The results were staggering.

Use our h20 RockTape for your Equine, canine and feline friends!

Are you a medical Professional working with Equine, canine, feline and would like to start using RockTape? sign up for a medical account here and save