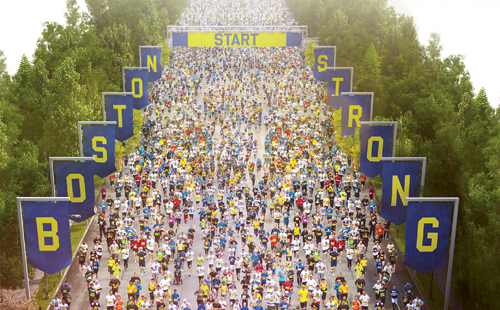 The Boston Marathon is the oldest annual marathon and one of the most famous racing events. Of the six world majors, the Boston Marathon has the most dynamic and inspiring history. We’re always humbled to be a part of it! Every year we’ve had a presence at the expo, we’re taken aback by the concentration of inspirational stories we hear from the athletes we’re taping up for the race. Here are some of the runners we met this year:

This man had us tape his shin splints to prepare for his 26th Boston Marathon in 26 years.

Bob Rebello is a Guinness World Record Holder; he is the oldest person to finish a marathon on all continents. He recently celebrated his 80th birthday by running 80 miles, doing 80 crunches, and 80 pushups. We taped his runners knee in preparation for the Boston Marathon.

Roosevelt Giles has run a marathon on all seven continents and all 50 states, including all the six majors: Tokyo, Boston, London, Berlin, Chicago and New York City. This was his second Boston Marathon. Another classic case of runner’s knee. For those who are wondering, in Antarctica, marathoners will run alongside whales and penguins inhabiting the area. *Penguins are too fast to grab and hug.

Megan Williams is one of the victims of the 2013 Boston Marathon bombing. She ran again last year despite lingering chronic injuries, which required more surgery this year to remove scar tissue impinging on her femoral artery. One of our RockDocs taped her with this lymphedema pattern ease the post-op swelling. Williams planned to do the race again this year with the help of some physical therapists from UMASS.